As many of you will know, I’ve been quietly running my little Haig Whisky Fan site for the last 5 or 6 years with the aim of keeping the name of Haig Whisky alive as the oldest whisky in the world.

Until 30 or 40 years ago, Haig whisky which been produced for over 300 years in Cameronbridge in Scotland was one of the most popular whiskies in the world. But then it faded and died with only Haig Whisky aficionados and Fan sites such as HaigWhisky.com keeping the name and the legend alive through websites and social media pages such as our own at www.Facebook.com/haigWhisky and www.twitter.com/haigWhisky.

Imagine my surprise then when I was contacted by Diageo a few months ago telling me that they were re-launching Haig Whisky with a new entry level single grain scotch whiskey from Cameronbridge distillery to be called Haig Club (buy Haig Club online). I’d like to think that they named it after our little Haig Club with 100 members scattered around the world, but I think that it may just have been one of those crazy whisky coincidences! 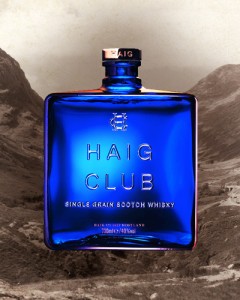 On top of all that they told me that the new face of Haig Club would be David Beckham! Now when I think of Haig Whisky, I have always thought of Field Marshall Sir Douglas Haig of World War One fame. What will the original Haig Club make of this!

As no one in Diageo sent me a free sample bottle to say Thanks for my 5 years of keeping Haig alive, I had to buy my own bottle in the airport whiskey shop enroute to Brussels. If I thought that David Beckham and Haig Whisky was a shock, imagine my face when I saw this big blue after shave bottle and the price!

But, you know as I carried it (still sealed) around Brussels it began to grow on me. It’s a bold and courageous marketing statement The packaging is innovative and different. And it’s a single grain whisky which should make it easy drinking and inoffensive.

Single grain whisky is the more basic whisky that is blended with pot still and single malt whisky to tone them down for whisky beginners. In Ireland the starter Original Bushmills has 50% Grain and 50% Malt whiskey. It’s bigger brother Black Bush has 20% Grain and 80% Malt whiskey and finally Green Bush or Bushmills Malt is all grown up at 100% Malt. Grain whisky is lighter and sweeter and also has little or no character unless it has been aged for at least 5 to 8 years such as Greenore whiskey in Ireland which takes its character almost totally from the wood of the casks it has been matured in for over 8 years. Grain whisky is therefore more normally used to take the rougher or more robust edges (beloved of experienced whisky drinkers) off the more usual Scotch whisky made from peated malt.

Haig Club is therefore an entry level whisky aimed at the whisky beginner or at converting drinker of other spirits such as gin and vodka over to whisky. From Haig Club, new whisky drinkers can gradually work up the Pooka Whisky scale from Haig Club at Pooka 1 to say Laphroaig at Pooka 2 or 3 and on in years to come to Pooka 4 and even 5!

So enjoy Haig Club the latest addition to the 350 year old Haig Whisky clan! It’s a harmless little whisky which is probably undeserving of much of the harsh commentary such as at the Haig Club Whisky reviews over at Master of Malt and other sites. My main quibble is with the exorbitant price being charged for a very basic, entry level single grain Scotch whisky.

The Haig Club marketeers make a big fuss over telling us that it is aged in 3 different types of cask, but despite my many requests for information through their Twitter account, they have declined to reply to me to tell me what type of casks and for how long? If, as I suspect, the total maturation time is the minimum 3 years required by law in a mix of first fill and refill bourbon casks, this is very basic grain whisky indeed and certainly not worth the price which is about three times what it should be for a similar or better single grain Scotch or Irish whisky such as Greenore or Teeling Single Grain..

The lovely gift box packaging is of the highest quality, although here at the Haig Whisky Club, we have received numerous complaints from customers who ordered Haig Club online from a Supermarket chain only to have it delivered with no gift box or packaging. We have also received numerous complaints about the Haig Club Corks or Stoppers breaking after a few days of use. See Facebook/HaigWhisky.

In summary and in my humble opinion, this Haig whisky is not worth over £50 a bottle. Is the bling of the box and bottle worth £50 as a nice corporate gift or Father’s Day present? That’s your call.

With apologies to Meghan Trainor, my review of Haig Club can be summarised as “It’s all about the box, ’bout the bottle, not barrel”!